For some reason (peer-pressure!) I signed up for the 10km MÃ¼nchen Stadtlauf (City Run) when I ran this morning. My company, Infineon/Qimonda, is a major sponsor, so they give free entry to all employees and have a courtyard reserved just for us for pre and post race, so I joined several workmates in the run. The plan was to run at least 10km total in the weeks coming up to the event, but I completely botched that, running only about 6km last Tuesday, but nothing else of significance in the past 3 months or so. So as of 8:00 this morning, I was just hoping to start out slow, stay consistent and be able to finish. Well, I did exactly that, running almost perfect 1k splits and ended up with a 50:42…. That’s about 19 minutes slower than my personal best from college, so I’m figuring that’s just under 30 seconds extra for each pound I’ve gained since then, and that way it almost sounds reasonable!

I actually did have a good time though, and unsuriprsingly, the event was excellently run (no pun intended). There were >10,000 people signed up for the 10k, but everything went very smoothly, no waiting in huge lines or getting caught in crowds. It was chip-timed as all the big races are now, and as soon as you finish you give your chip to a dude with a computer, he scans it, and immediately prints out a result and time card for you. And it was also cool because we received our race packets in the mail last week, and they included the race t-shirt that everyone wore, which were bright orange and a nice, light silky material. That way, everyone who paid was wearing the same shirt, so it cuts down on “race bandits”, or those crazy people who like to run for the fun of it, and will enter a race without paying or getting a real result. Plus, it just looks cool to have thousands of people running through the trails in the English Garden wearing the same thing.

Arguably, the highlight of the race morning was walking out of the chute after the race, and being greeted with an ice cold Weissbier! Only in Germany! 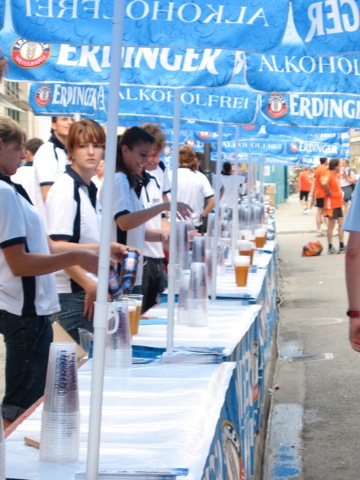 And you gotta’ give it up for this guy, running the 1/2 marathon race, in full lederhosen, while pushing a stroller (but bucking the dress code!). 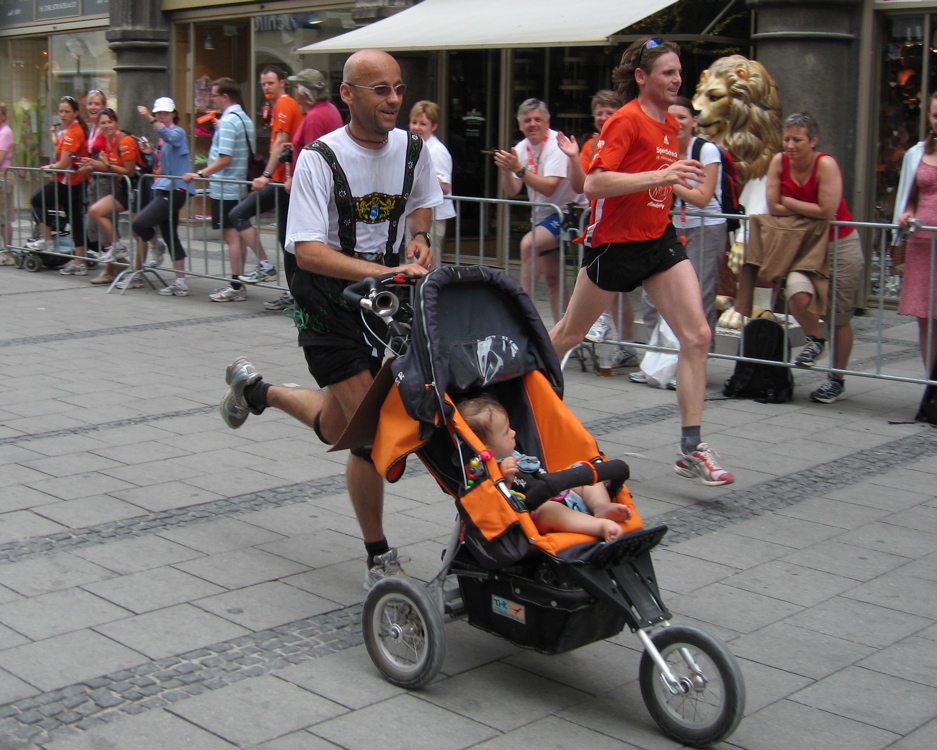 Hope everyone had fun – it was a good way to spend my last weekend in Germany. Time to cheer on Deutschland in the upcoming quarter-finals game with Argentina on Friday!

Update: Here I am hanging out with some of my Spanish friends after the race.